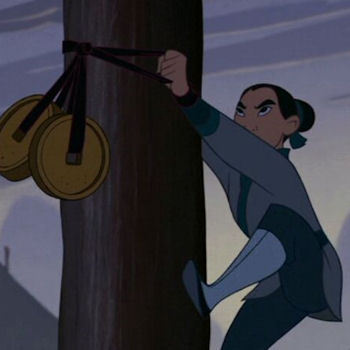 Today’s #ifthiswereaTTRPG post comes from the Disney movie Mulan. At the army camp, Captain Li Shang puts a test to his clearly unfit-to-fight troop: using the heavy golden weights – “Discipline” and “Strength” – climb to the top of a high poll and retrieve the arrow at its top.

Naturally, letting the weights be weights and not complementary pieces, each member of the unit tries and miserably fails to reach the top of the pole.

Today’s post centers on the process of Mulan successfully reaching the top of the pole, thus setting the tone for the army in their preparations.

#ifthiswereaTTRPG, the GM would set the table for the players playing characters in the army unit with Li Shang’s speech about using “Discipline” and “Strength” together. To see if any characters could reach the top from the jump, the GM would first have each player attempt a Wisdom check. The players playing Mulan, Yao, Ling, and Chien-Po all miserably fail their rolls.

The GM then offers to let the players try to climb the poll anyways using raw Strength/Dexterity checks which, naturally, all four players fail.

The player playing Mulan, despite the struggles in subsequent training, is inspired both by Li Shang’s incredible skills and by her own fierce determination to not return home in deep shame. To her, the lightbulb goes off: THAT is what the Captain must mean by using Discipline and Strength. They must work together, not as polar opposite forces in conflict with one another. So after Mulan fails her final trial during training and told to “pack up and go home” by Li Shang, the GM tells the player playing Mulan they have one last chance.

But with the lightbulb having gone off in the player’s head, they tell the GM that the secret to reaching the arrow is to intertwine the weights together so they facilitate the climb. This justification pushes the GM to reveal that yes, that’s exactly how it’s done: the GM would then grant the player playing Mulan a bonus to the forthcoming roll to Climb as a byproduct of the method of climbing.

It’s a vitally important roll for Mulan: and a critical success at Climb! Using “Discipline” and “Strength” – both literally and figuratively – Mulan is able to methodically work her way up the poll and to its top where the rest of the unit cheers on her last few feet. When Li Shang emerges from the tent, Mulan throws the arrow to the ground, making him proud and, for once, giving him hope that this unit can be a successful one.

It’s a great scene and a wonderful example of a tabletop role playing game puzzle being brought to life in an effective and meaningful way.